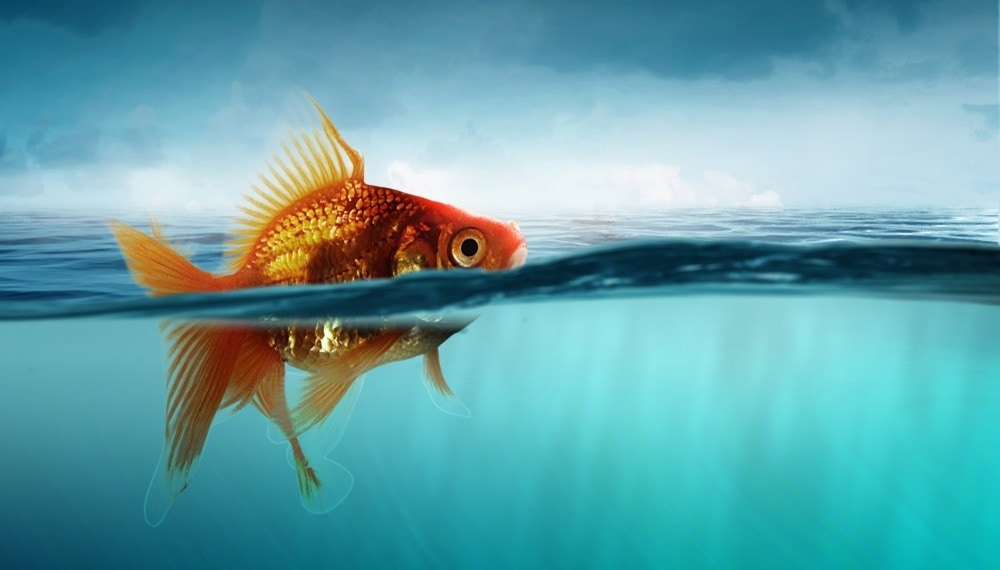 Most of us had a goldfish as a pet growing up. Maybe you won it at a carnival. Or, your parents didn’t want to clean up after a dog you promised you’d walk so they bought you a pretty little fish instead.

Regardless of the why, you probably had a few growing up. In fact, they’re the most popular household pet, especially in China.

You could probably spot a goldfish in a fish tank if you had to. But did you know that there are actually more than 200 different types of goldfish? And they’re all special in their own way. From goldfish that have huge bubbles under their eyes to spotted goldfish, there are so many varieties, it’s hard to pick your favorite.

Here, we’ll talk about 7 common different types of goldfish. Did you really think we’d feature all 200? There isn’t enough time in the world to do all that. The 7 highlighted here are just a handful of the colorful and unique goldfish that swim in ponds, aquarium tanks and fish bowls all over the world. But first, check out a few interesting and little-known facts about goldfish.

If you want your goldfish to live a nice, long life, you need to be kind. You wouldn’t let your dog go 3 days without feeding it, would you? No. You have to remember that your goldfish is not just a pet – he’s a member of the family. Treat it like one.

Here are a few fun facts about goldfish:

Hair Algae - Causes & How To Get Rid of Them

Now that we have your interest peaked, let’s take a look at 7 of the different types of goldfish.

Most of you would recognize the single-tailed goldfish. It looks pretty much like a common goldfish, only it has one tail instead of two. Most grow to be about 10 inches long, which is pretty long for a goldfish. They’re usually intended to be either pets or feeder fish. (We’re not going to think about that at the moment – these fish are so beautiful – even the strange ones.)

They come in a variety of colors, including white, gold and yellow. They’re thin but have a long body. Their short and stubby tail sets them apart from a common goldfish.

Most of you thought Comet was just one of Santa’s reindeer. But, no – it’s actually a type of goldfish. It is a single-tailed fish, but the tail isn’t short and stubby. It’s quite long and forked. They have a flower caudal which sets them apart from the single-tailed goldfish. They usually grow to be about 4-10 inches.

The key is the tank – the larger the tank, the longer the goldfish will be. The Comet goldfish doesn’t live as long as some of the other varieties. They’re so active, they are constantly under stress. And, like all goldfish, are subject to their own waste and ammonia in their water which is not good for them.

With a name like Shubunkin, this fish must look pretty unique. It’s purposely bred to be different colors. But, unlike a Comet fish, it actually resembles a Calico cat.

It’s orange, with blue, white and black spots. Shubunkin fish’ scales shimmer, almost as if they’re covered in glitter. Just don’t put glitter on your goldfish – that’s never a good idea! Some varieties of Shubunkin Goldfish are hard to find. For example, the Bristol, which has a large, heart-shaped tail, is very difficult to get your hands on.

A lot of people think that there are only two types of goldfish – Common and Fancy. Fancy goldfish have two tails, not one. In fact, most goldfish do have two tails.

The Ryukin goldfish is very strange looking indeed. They are very tall and have a big hump behind their head. You may not recognize one at first, especially if they’re not fully grown. But, once they grow, you’ll see how pointy their heads are.

You’ll also see that their tail can be twice as long as the rest of their body. Because they are a lot bigger, they shouldn’t be kept in a small aquarium or fishbowl. They need a lot of room to move around.

A lot of goldfish can be described as cute or pretty. This is not the case with a bubble-eye goldfish. This fish actually has huge, bubble eyes. The sacs are actually filled with water.

They’re hard to care for as well. Because their eyes are so fragile, they can pop if they hit something sharp. You want to make sure there are no rocks or sharp objects in the tank of you could end up with a blind fish.

If you want a goldfish that looks like a lion, this is the fish for you! It’s a very popular type of fish for this reason. It actually looks like it has a lion’s mane on the top of its head.

This is called a wen. It’s usually red and doesn’t show up fully until your fish is grown. Believe it or not, people who have Orandas as pets actually trim their hair from time to time.