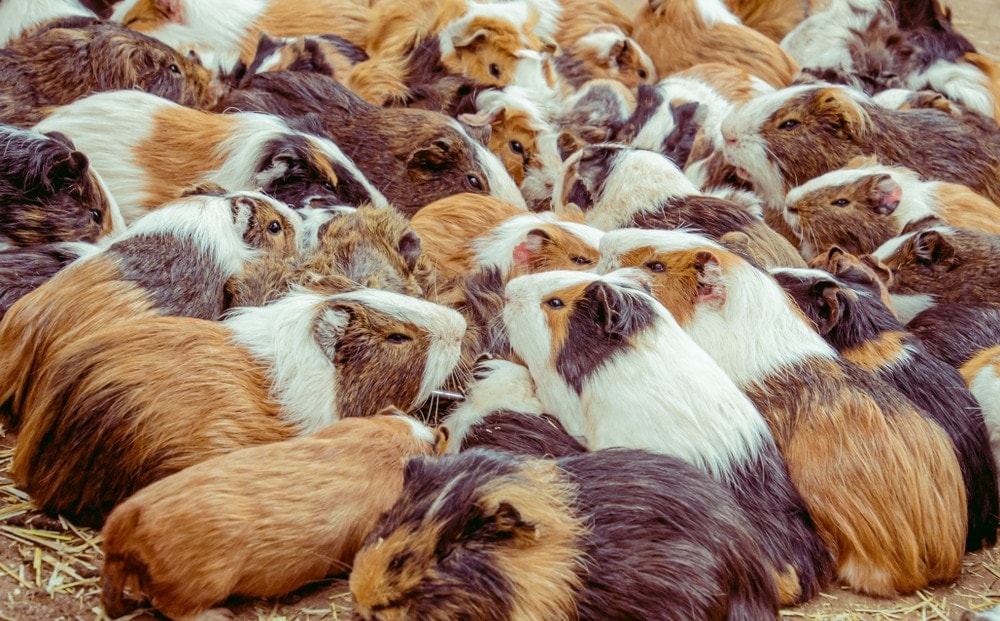 The breeding of guinea pigs is not an easy task for new owners to undertake.

You must know when they’re gestation and how to care for them. Also, at what age does their sexual maturity come about and when females are in the middle of their heat. You must even know how to care for piglets.

Sexual Maturity and How to Identify Their Age

Sometimes they can take longer, but they are usually ready to impregnate a female in three to four months. The male guinea pig does not need humans to promote them, reaching sexual maturity.

If She’s Not in Heat

If a male is bothering her to have sex, but she is not in her heat cycle, she will become aggressive and try to bite him. Female guinea pigs will also urinate on males and smack their faces in an attempt to make them leave her alone.

When the take when the mother guinea pig is done giving birth, make sure there are no males around her. Even within the first 12 hours, the female guinea pig can get pregnant again. Getting pregnant so soon after birth could severely cause distress to her body and deprive her of the healing time she needs. She will also not be able to have enough time to gain back the nutrition she lost creating her first litter.

When a female guinea pig is pregnant, she will need more vitamins and minerals in her diet than before. Guinea pigs are prone to scurvy because they cannot make their own vitamin C. So, you’ll need to add extra vitamin C foods into her diet. You can also add it to her water. But vitamin C water must be refreshed every day.

One crucial aspect that you must know about a guinea pig’s pregnancy is that if she does not get pregnant within the first ten months of her sexual maturity, it can be much harder and more painful to get pregnant and give birth after the ten months are up. This is because there is a bone in her pelvis that fuses if there have been no pregnancies.

If a guinea pig becomes pregnant after ten months, it may need a C-section in order to deliver the babies successfully. You will have to take your female guinea pig to a veterinarian to do this.

When your guinea pig becomes pregnant, it will take about ten weeks for her to give birth. Typically, the most common amount of piglets she will give birth to is 3 to 5. But she can also give birth from 1 to 6 piglets at a time.

When the female giving is actually in labor, each birth will take about 5 to 10 minutes, and the entire labor process takes about an hour. The mom guinea pigs will be exhausted after she is done and will require soft food and water. The new mother guinea pigs will eat the afterbirth.

Although it is sad to see, do not be surprised if your guinea pig gives birth to stillborn piglets. It is prevalent for them to have stillborns and miscarriages. This is true even when they’re at the perfect sexual maturity age, which is around six months, and their rate of stillborns increases after its 10-month window.

What to Know about the Piglets

When her piglets are born, they will look and act already like they are adults. They can walk, and they’ll have their teeth and all of their fur. They can make noises. Even a few days after they are born, they will begin to eat hay and soft pellets. But they will require drinking their mother’s milk until they are three weeks old or 21 days.

Guinea pigs don’t make nests or homes for their baby piglets. The piglets are born with all their facilities and can start being independent within hours of birth. But it is best to separate a guinea pig and her piglets from other guinea pigs if you have them. Baby piglets are easily injured and can be stepped or trampled on. Plus, the mother guinea pig will have more time to recover and will look after them better if she’s alone.

Petsoid is a blog for all pet and animal lovers. We are a free resource for well-researched and unbiased pet information and product reviews. We are owned and operated by SellenMedia.
0shares