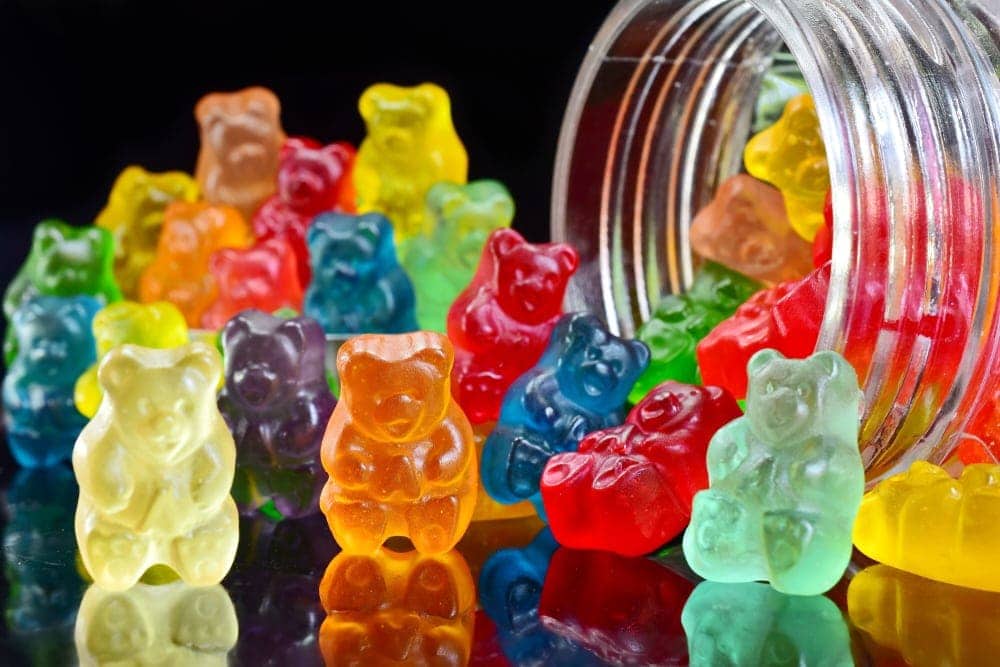 It is not can they eat gummy bears but should they eat them, which is NO.

They are not good for dogs but people still feed them to their dogs because their dog looks at them with those sad eyes and begs for them so the pet owner gives in to them.  One gummy bear would probably not hurt a dog but any more than that could be harmful and dangerous for your dog.

Why Are Gummy Bears not Good for Dogs

One main reason that you should not give gummy bears to your dogs is that they may contain Xylitol, which is a sweet-tasting crystalline alcohol that is used as an artificial sweetener in many foods.  It is a naturally occurring alcohol that is found in many plant materials.

The sugar in gummy bears could cause took decay and make them not want to eat their own food.  If they develop tooth decay this could put them in trouble because most dogs eat dry food.  With tooth decay or loss of teeth, it would make eating hard for them.  Gummy bears are considered one of the ten most dangerous foods for a dog.  Most of them contain a lot of sugar which equals calories, which can make your dog fat and hyper.

Dogs are omnivores, which mean that they can eat both animal and plant matter and they have a digestive system that is delicate when you compare them to a human’s digestive system.  This is another reason why your dog should not eat gummy bears, or any people food for that matter.

Can You Count a Dog’s Nipples to Predict Litter Size?

Gummy bears have been around for a long time but it has just come to light recently that it can contain xylitol, which is very toxic for dogs.  While gummy bears are not good for dogs, if you accidentally give them some with xylitol it can be deadly.  If you want to give your dog one gummy bear, always read the ingredients to make sure it does not list xylitol as an ingredient.  If not listed, err on the side of caution and do not give them one.

Here are some of the symptoms of xylitol poisoning.  If you think your dog has been poisoned by xylitol, take them to the veterinarian immediately.  It would help if you know how many they ate and how long ago they ate them, whether you gave them to the dog or the dog got in them on its own.

Some of these symptoms may happen instantly but some may take time for them to happen.  Sometimes when a dog eats gummy bears, their body will automatically react and they will start vomiting trying to rid their body of the gummy bears.

Although the reason they are vomiting, it could be due to a large amount of sugar or a symptom of xylitol poisoning.    To be safe, take your dog to the veterinarian.  If they have accidentally eaten gummy bears, try to find the package and check the ingredients to see if it contains xylitol.

If your dog wants some of your gummy bears you can make some homemade ones that are actually good for them.  For these dog-safe gummy bears, you will need a half cup of bone broth for the base ingredient as this is suitable for your dog.  You will also need a half of a beet and an envelope of unflavored gelatin plus a handful of parsley.  This recipe will make about a hundred gummy bears.

Blend the beets with one to two teaspoons of water with parsley.  The next step is to separate the solid part of the puree from the liquid.  Mix the vegetable liquid with the gelatin and let it sit for five minutes.  Heat the broth and then stir in the vegetable gelatin mix into the broth, stirring until it is dissolved totally.

« How to Identify Male vs. Female Mollies