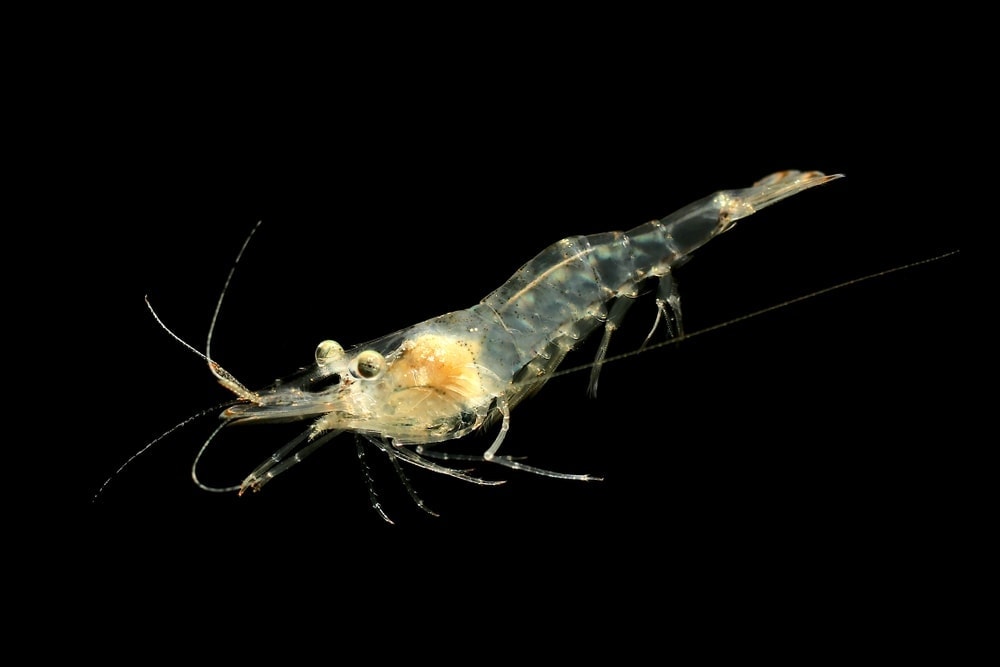 For the purpose of aquarium cleaning the shrimps top the list and that includes the ghost or glass shrimp.

These types of shrimps derive their roots from North America and are a freshwater shrimp of the genus palaemonets. The Name “Ghost Shrimp,” is inclusive of a wide variety of shrimps, such as the Thalassinidea, and the Caprellidae.

The ghost shrimp just like its name have the habit of disappearing especially during molting, they themselves aren’t easy to identify in the water given their transparent glass-like body. During molting the ghost shrimps disappear because its shell is normally very soft thus predisposing them to danger.

The ghost shrimp can also be reared as food for the big fish like the cichlids in an aquarium, and to take care of them properly just ensure that the aquarium isn’t very clean so that the shrimp can feed on the remaining food particles. However, don’t underestimate their small size and be deceived to fill the tank with their species because they might increase the level of toxins in the water.

Feeding this type of shrimp is a no brainer because it will eat almost anything that is available in the fish tank; however, don’t fail to provide it with other supplements for its nutritional needs, such as the fish flakes, the algae wafers, and the shrimp pellets. Available feeds in the aquarium are the detritus, algae or the dead plant matter.

For starters, you could incorporate about 5 gallons with the option of going even bigger, and given their size a ghost shrimp tank should have heavy plantation for hiding. Live plants would do best because apart from providing a hiding place they will also provide natural food to your aquarium dwellers and produce oxygen while absorbing carbon dioxide and ammonia that is generated by the fish.

Your aquarium can also benefit from rocks, which would provide an alternative hiding place. Ghost shrimps are scavengers by nature and will burrow in the substrate as they search for food; this, therefore, means that you should use very soft substrate like sand and fine gravel. The latter will ensure that the shrimp does not get injured given their sensitive antennae.

Shrimps as a member of the many aquarium dwellers but happen to be the only one that isn’t so involving when it comes to the setting of the water temperatures. For one they can be accommodated in an aquarium with standard tropical conditions. 65 to 82 degrees Fahrenheit should suffice for water temperature and while other dwellers love soft water the ghost shrimp would thrive in hard water of PH value 7.0 to 8.0.

Ammonia is a lead toxin in an aquarium and should be monitored at all costs, nitrates, on the other hand, can be maintained at 5-10 ppm because they are necessary for the growth of the aquarium plants.  Ghost shrimps should not necessarily be included in a community tank if it is being reared as a feeder, you can, therefore, just use a simple tank but with a breeding setup.

Also, avoid situations that may lead to a rise in temperature or toxins, you should, therefore, refrain from overfeeding your shrimps, don’t overstock your aquarium, use clean filters and ensure that you carry out regular water changes and keep the water moving to maintain cleanliness.

Ghost shrimps don’t have the ability to have an aggressive temperament, one because of their size which predisposes them to danger, not to mention being sucked up by the filter. This, therefore, goes to show that the shrimp should not be added to an aquarium with aggressive fish; such as the hatchet and tetra fish, the danios and the cherry barb, and lastly the kuhli and the zebra loaches.

In essence, is that you should avoid pairing your shrimp with fish that have a large enough mouth to fit the ghost shrimp. The latter pairs well with their own, you could, therefore, invest in a shrimp only aquarium and integrate the Amano Shrimp, the vampire and bamboo shrimp among others. The docile snails can also be included in a shrimp aquarium to help in cleaning and to enhance the look of your fish tank.

Ghost shrimps breed easily in a conducive environment even if it is a community fish tank. But if you are breeding them as feeders then you should find a separate tank to achieve the numbers. In your breeding tank ensure that you have both genders, the female can be spotted with a green saddle underneath their body and usually feature a larger body structure than the males.

If you keep a close eye on the shrimp you will notice that the female shrimp has between 20 and 30 green dots of eggs in the areas around its legs. The male will then fertilize them and you can then move the egg-bearing shrimp to a breeder tank, this is to prevent other tank dwellers from turning the young shrimp into a snack.

The above situation can also be replicated by the female shrimp and it would thus be best to take it back to the main tank after at least 3 weeks later if you don’t want to find a clean tank with zero baby shrimps.

A shrimp breeder tank has to be treated with the utmost care and this is from the water temperatures to the water filter. The latter should incorporate a sponge that would protect the young shrimp from being sucked in and killed. The amount of sediment should also be reduced in the breeder tank, but you can incorporate a few edible plants for the shrimp to feed on.

Keep a close eye on the shrimps and once you realize that they have grown legs then you can change their diet and feed them the adult foods. And the moment they clock five weeks they can be transferred to the main tank, as food for the fish or to add to an already existing community.

« How to Clean Your Fish Tank