What Does it Mean When a Dog Sits on You? 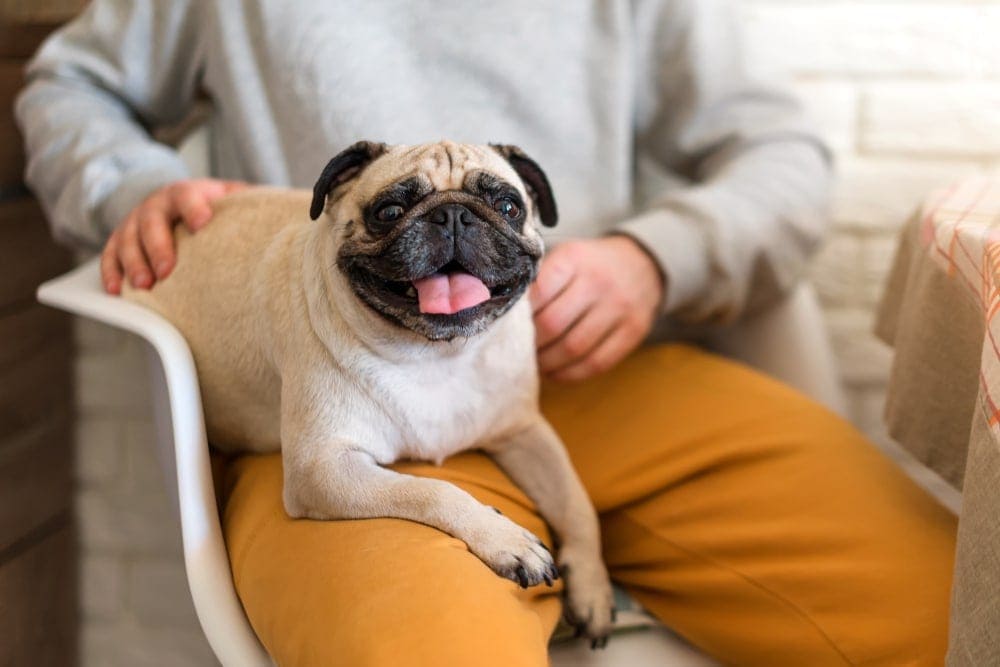 Dogs love to sit on you. Why? Well, there are many reasons. In this piece, we’re going to find out exactly that.

Typically, it’s not a cause for concern.

But sometimes they might be overly clingy or too heavy for you and in that case, it’s recommended to train them to have their own private space.

Now, let’s see what does it mean when a dog sits on you.

Some breeds are more “lap-friendly” than others

Some dog breeds are noted for their lap-friendliness.

Chihuahuas, Maltese dogs, and Shih Tzus are some good examples. These are small dogs (toy dogs) and would like to sit on your lap for a number of reasons.

By the way, did you know that “Shih Tzu” literally means “little lion?” Don’t be alarmed, this breed has exactly the opposite name for it. The Shih Tzus are, in fact, very affectionate and would follow you all the time.

The reasons why these breeds are more likely to sit on your lap are:

There are other, larger breeds that try sitting on your lap too. For example, English mastiffs and Great Danes are known to attempt being lap-friendly even with their large sizes.

These “silent giants” are simply looking for affection and contact. Just like how you see them as your companions, canines also see their owners as companions and find it completely okay to sit together (in this case, on the lap).

Dogs are known as pretty attention-seeking pets. And for that, they’d go to any length and means. The handiest way to get some attention and caressing in an indoors situation is to sit on the lap.

And it works! So, they repeat.

Dogs are inherently very social animals. And a large part of being social comes down to being acknowledged and loved. Surely, your dog won’t request attention verbally so what’s the next closest thing? That’s right.

They want you to show them that you love them. Just as humans, they also need frequent reminders for the same.

This is also a good time for giving some belly rubs or even indulging in some playtime with your canine companion.

Who doesn’t want to feel secure?

Dogs also sit on the lap for a sense of security. When they’re on your lap, they’re fairly invincible. Also, there’s more at work than meets the eye. For example:

They love to spread their scent

Dogs mark their territory with their scent. Now, surely they won’t do the stronger marking on you but they still like to lick and sit on you to assert their ownership.

If you have other pets or when you’ve returned home with a lot of other scents on you (that you won’t be able to know, of course), be ready for even more contact!

Reason Why Your Dog is Breathing Fast while Resting

This is a pretty harmless way of asserting their ownership and one that won’t go on for a very long time. Once you’re full of their scent they’d simply move away.

Somewhat connected to the previous point, dogs also become overly aggressive in their pursuit of dominance sometimes. For example, they’d sit on your lap and growl or bark, at either you or others. This is not good behavior and you must teach them to sit away from you if they keep it up.

Just move them from your lap and you’re good to go. They’ll learn quickly enough.

Cuddles! Who doesn’t love them?

Everyone loves cuddles and dogs are no aliens.

I am sure sometimes you feel a need for a cuddle from your canine companion. You can simply fetch them and force-cuddle (not that you should!) but dogs can’t do the same.

So, when they feel like cuddling and you’re sitting, they love to sit on your lap. It comforts them and is like a cuddle for them.

So, what does it mean?

When a dog sits on you, it can mean a number of things.

Some breeds are very lap-friendly, including certain big ones. Also, dogs seek attention and want to feel secure, and sitting on your lap is a great way for both the reasons.

Further, canines also spread their scent especially with other pets around or when you return home. Needless to mention, sometimes they just want a cuddle. And if they’re going for a display of dominance, then it’s a great idea to teach them to change their habit.

With that being said, you should always know that a dog sitting on you is a fairly harmless thing. At the same time, it’s nothing too complex. Your companion is most probably looking for some time with you, so give them that!

« How Long After Eating Does a Dog Need to Potty?

Can You Give a Puppy Ice Cream? »