Why Do Dogs Lie on Their Backs? 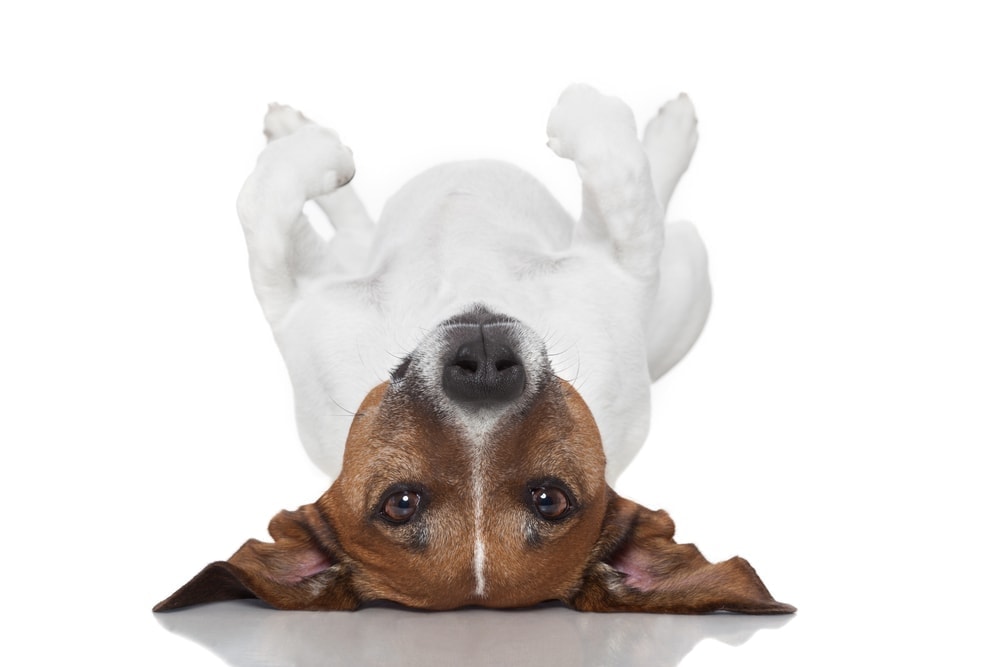 You’ve probably had a good laugh or two watching your dog lying on its back with its paws up in the air.

But why do these animals do this? There are actually quite a few different explanations for this behavior.

As a dog owner, you should find these answers interesting, to say the least.

1. They are Actually Sleeping

Believe it or not, a lot of dogs can fall asleep on their back, and it is actually comfortable for them. This is a very vulnerable sleep position, which means that your doggo trusts you completely. It is something that dogs tend to do after they have established a deep bond with their owner.

It is also possible that they are sleeping this way so they can flip onto their paws as fast as possible. This is probably a deep instinct that dates back thousands of years. They want to be ready to respond if a dangerous situation presents itself. While they might not be in any danger at home, it is just a raw instinct that your dog has.

2. It Helps Them Regulate Their Temperature

Whether your dog is sleeping or just relaxing, being on their back could help them stay comfortable. They might be trying to catch a nice breeze by having their belly exposed to the open air. This is more common in the warmer months of the year, though it is something that your dog could do at any time.

If you notice your dog panting a lot, it is probably because they are hot. These animals don’t sweat, so panting is one way of regulating their own body temperature. If your dog tends to get hot a lot, you might want to consider investing in a cooling bed for them. This is a fairly common problem with dogs that have thick double coats.

If they are outside, they might roll onto their back in an amusing display as a way of soaking up the UV rays from the sun. This becomes increasingly common as the weather outside gets a bit chillier. This is just their way of staying warm while enjoying being outdoors. After all, who doesn’t like feeling the warmth of the sun on their skin?

There is almost nothing more irritating than an itch you can’t quite seem to scratch. Dogs will sometimes roll onto their back in an effort to relieve an itch on their back. This is why you might see your pooch flailing around wildly upside down. They can’t exactly ask you to scratch it for them, so this may be their only option for getting relief.

It is fairly common for dogs to do this on carpeting, as it is has a rougher texture than hardwood or other floor surfaces. They also might collapse down onto one of their toys in an effort to put a stop to the incessant itching.

4. They Want You to Rub Their Belly

There’s also a good chance that your dog has flopped onto its back in an effort to get your attention. Everyone knows that these animals love to have their belly rubbed and scratched. This is simply your pet’s way of letting you know what it wants.

The best thing you can do is to accommodate their needs in the moment. This will keep your dog as happy as can be. If this is indeed what they are asking for, you’ll most likely notice their tail will be tucked between their legs. If you tend to run their belly often, they have probably learned that it is something you will do, so don’t disappoint them.

A dog’s body language can tell you a lot about how it is feeling at any given moment. Rolling onto its back could be a sign that they are afraid. This behavior could be cause for concern if it keeps happening on a regular basis.

It is not a good idea to ignore any compulsive type behavior from your pet. They could be doing this because they are afraid of something in particular. Consider whether or not this tends to happen as a result of something else. Some dogs do this when their owner starts using a vacuum, as it is very loud and scary to them.

You should at least consider going to a professional trainer if this particular behavior becomes a problem. It might continue to get worse if you don’t address it soon. It is a good idea to not touch your dog if it is doing this due to fear. Just let them naturally calm down on their own.

Pay attention to anything else your dog might doing, such as making a whining noise or drooling. These are both signs of tension and stress, which could be due to fear. Make sure that you maintain a calm and stead voice when talking to them while they are doing this. While it is not something you should scold them for, you might not want to simply ignore it.