Why do Horses Roll? 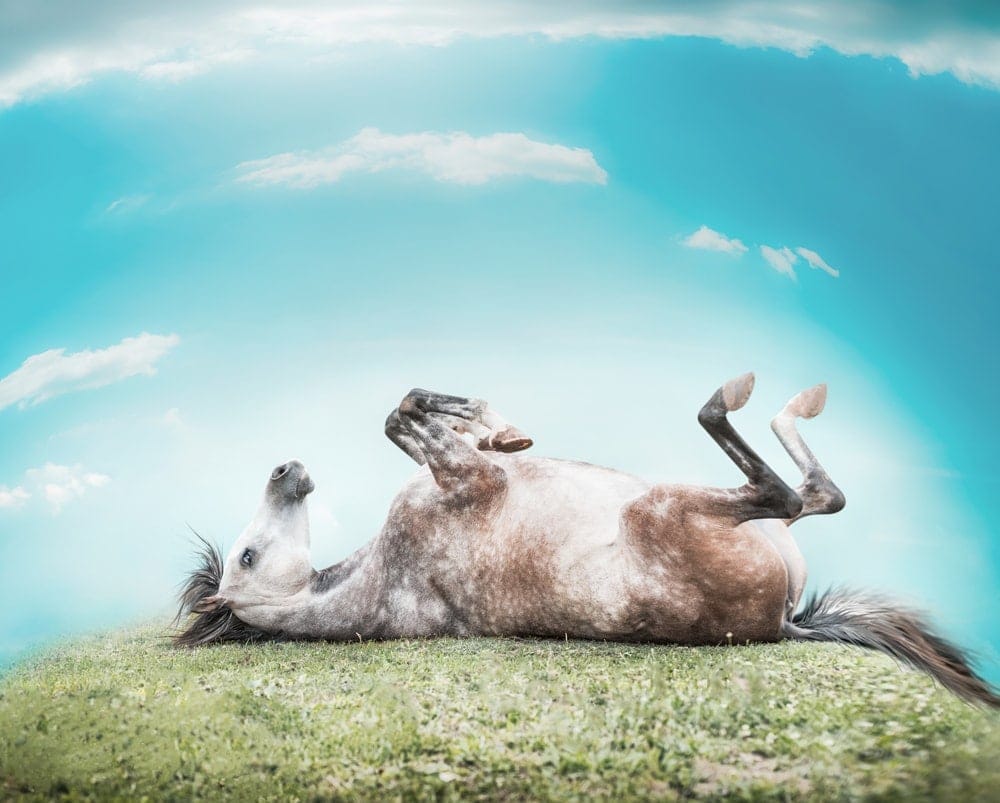 You are driving on a country road and you see horses in a field.  One is on its back, rolling around, and feet kicking in the air.

Is it a sign that something is wrong or is that just a natural behavior?

Why do Horses Roll?

This is a natural behavior of horses and there are many reasons why they do this.  Many times, after being ridden, brushed down and turned out into the paddock, the horse will just lie down and start to roll around.  This is one way that they are scrubbing their back and sides.  It may also be done to relieve any irritation from tack or sweat.

Some seem to think when a horse rolls in the sand or mud they are using it to help protect them from biting insects and sunburn.  To a horse owner, it can be frustrating that after you give your horse a good bath or grooming that they find some patch of sand or dirt to roll it.  It is just the horse’s way of making their skin feel normal to them again.  To a horse, the grooming or bath has changed how their skin feels and they do not like the feel.

What this means is that when one horse sees another horse rolling, they will copy that horse’s behavior.  This is much like people do, copying each other.  Rolling is like a massage to a horse so when one horse finishes with the sandy spot, another horse will do it until all the horses have done it.  It is nothing to have a bare circle in the field or pasture that is a horse’s favorite rolling spot.

How to Safely Fall Off Your Horse

As mentioned, rolling is a natural behavior for horses but there may be a time when it could indicate a problem.  Sometimes when you are riding a horse, they will try to roll.  This could indicate that they are uncomfortable.  It could also be their way of being balky and not wanting to work or be ridden.

If your horse suddenly tries to roll when you are riding them, you should get off and check the tack.  Make sure that there is nothing pinching or poking the horse.  You should also check to see if there is any type of insect on your horse that could be biting them.  They may also be experiencing muscle soreness from being ridden so you should have them checked out by an equine chiropractor to find out if that is the problem.

If they are trying to roll because of balking, the horse can probably do with some re-schooling with a rider who recognizes the signs that they are going to try to roll before they do.

If you watch horses enough you can tell when they are doing a healthy roll and how it acts when it gets back to its feet.  If it is for enjoyment, they may circle a few times, get up, and then roll on the other side.  Once they are back to the feet and finished with the rolling, they will give their body a good shake to get the dust off.  Also, a healthy horse will usually never try to roll in their stall.

Comparing the Ages of Horse and Humans

If rolling is a symptom of colic, the horse will suddenly drop down, violently roll, and get up, standing listlessly without trying to shake the dust off.  The horse may also try to roll in its stall and even roll multiple times.  If they have been rolling in its stall, it may be covered in shavings and manure, appear sweaty and disheveled.

Some wonder if the rolling can cause a twist in the gut and cause torsion colic.  Others feel that the twist has happened before the horse starts to show the symptoms of colic.  No matter how it happens, the horse has to be prevented from rolling.  The reason is that it expends a lot of energy.  The horse could also hurt people that are handling them or itself as it thrashes violently.

Some feel if a horse has colic that it will not hurt if they roll around because it might work to their benefit.  They may be able to work themselves out of the colic situation.  They are trying to move fluid pockets or stuff like gas to get some relief.

« Comparing the Ages of Horse and Humans