Guinea Pig Sounds: How They Communicate 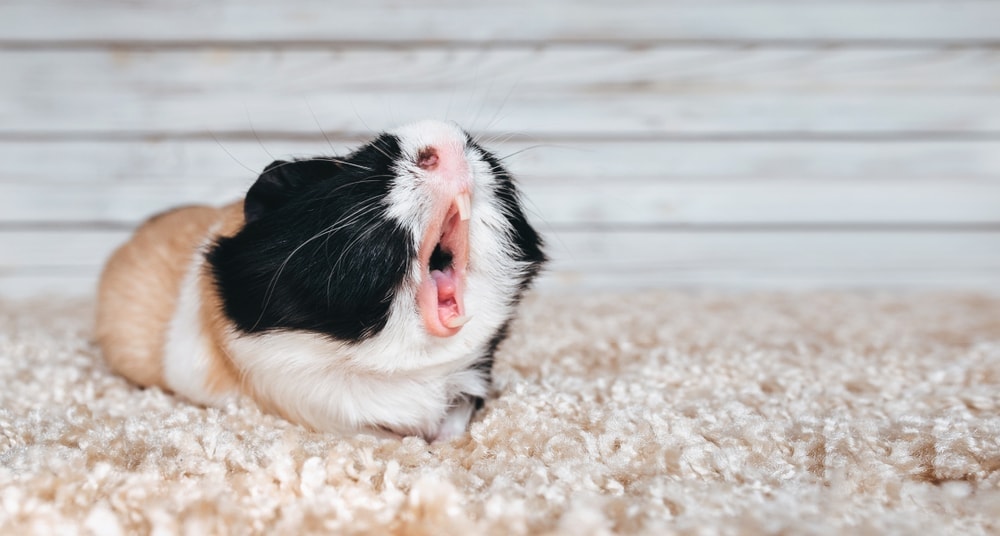 Guinea pigs make all sorts of sounds to communicate a wide range of emotions.

The more you understand about these sounds, the easier it will be to care for your pet. These sounds can help you to recognize how your fluffy friend is feeling throughout each day.

Wheeks are high-pitched sounds that are essentially a guinea pig’s way of crying. This could mean that they are trying to get your attention. Your pig might do this if it is hungry and wants to be fed.

It’s also fairly common for these animals to make these sounds when they are playing or happy. It could just mean that your pet is very content.

If your guinea pig is making a hissing sound, it could mean that they are angry or irritated. These animals often show their teeth while making this noise as a way of intimidating predators. You’ll want to avoid picking up or handling them for a little while if they start hissing. It is essentially their way of saying “leave me alone”, and you should listen.

When you notice your guinea pig making a high-pitched whistling type sound, it is probably because they are excited about something. These animals sometimes do this when they are being fed.

After all, there is nothing they enjoy more than a good meal. This particular vocalization is also fairly common during playtime.

Chirping sounds are also fairly common among guinea pigs, but we don’t fully understand what they mean. It is possible that this particular noise has been observed in these animals after losing their partner or a family member.

Believe it or not, hamsters also make purring sounds. While it might not sound exactly like a cat’s purring, it is somewhat similar. This usually indicates that your fluffy friend is very relaxed and at ease.

Purring among these animals can also mean that they are afraid of something. If the purring is brief and intense, this is most likely the explanation. If it is accompanied by a high pitched noise, this is almost certainly the case.

Can Guinea Pigs Be Left Alone And For How Long?

Have you ever noticed your guinea pig chattering its teeth? This is a common vocalization among these animals that serves as a warning to others. You don’t want to try handling them when they are doing this.

The cooing sounds that some guinea pigs make to their offspring as a way of comforting them. This vocalization is most common in the first couple weeks after the guinea pig gives birth. It is a natural part of a female pig’s maternal instincts.

Whining sounds among guinea pigs usually mean that they are irritated or bothered by something. This sound be anything from a nosey dog around its cage, or a loud noise that is disrupting its sleep.

It is very common for guinea pigs to sniff each other when they meet for the first time. Just like with dogs, this is their way of getting to know each other.

It’s important that you familiarize yourself with guinea pig body language as well. There is a lot that you can tell by paying attention to this.

Guinea pigs sometimes move rigidly from side to side in a strutting fashion. This is an aggressive display that is meant to intimidate predators. If your pig is doing this while chattering their teeth, you should definitely leave them be.

You’ll want to note that strutting can also sometimes be a way of attracting potential mates. If you have male and female guinea pigs in the same enclosure, you might notice the male doing this sometimes.

Licking is also a common thing that guinea pigs do. These animals sometimes lick each other as a way of grooming. They also might something if they detect the presence of food crumbs. This is usually nothing to be concerned about.

This particular behavior can be sexual in nature, but it is also a means of establishing dominance. It might seem a bit strange, but female guinea pigs often mount each other for the latter reason.

A guinea pig might stand on its hind legs for a short amount of time as a way of intimidating predators. This is something that these animals do if they are curious as well. If your pig sees something that piques its interest, you might see it stand up to get a better look.

When Should I Be Concerned?

If your guinea pig is constantly making a shrieking or whining noise, you should try to figure out why. It is possible that they are stressed due to having an inadequate enclosure, or being bothered by another pet in the house.

It is always a good idea to play it safe and take your pig to the veterinarian if you are concerned. Your vet should be able to help you with figuring out the problem. Just make sure that you take it to a vet that has experience with these animals.

Average Guinea Pig Lifespan: How Long Do They Live? »