What to Do When a Horse Develops Colic 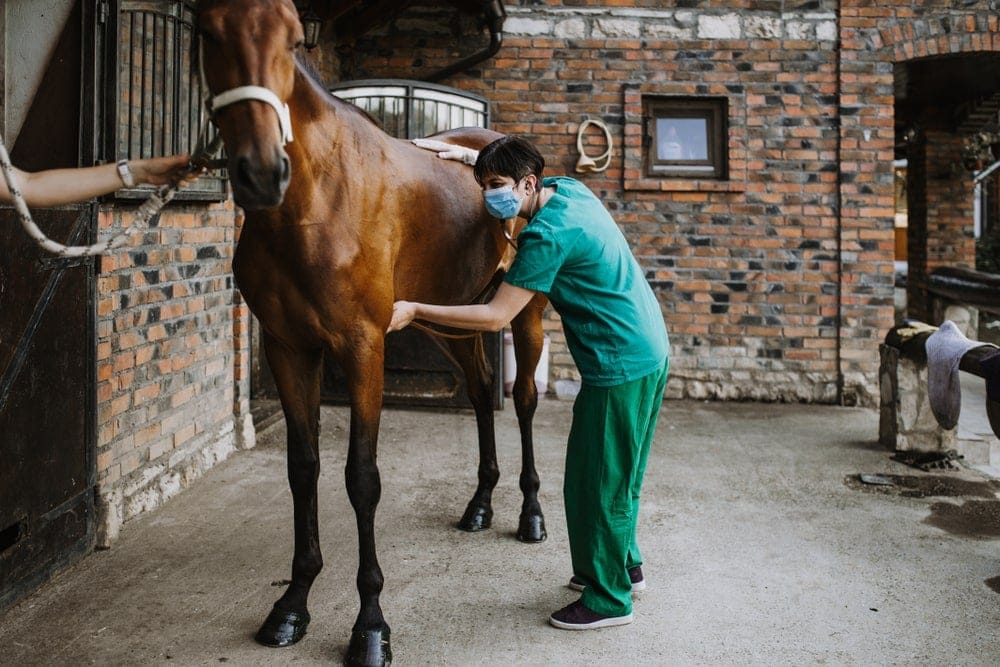 When a horse develops indigestion problems, it is best to get them checked out quickly, so it does not extend into colic.

There are many ways for a horse to develop colic. It is not an issue that will go away on its own. A horse with colic needs veterinary guidance and supervision.

What Is Colic in Horses?

Colic is extreme abdominal pain that occurs in a horse’s digestive system and its gastrointestinal tract. There are many ways for a horse to develop colic, but it all has to do with the food that they eat or what goes into their stomach. Colic isn’t actually a disease in itself, but it is a series of symptoms from inadequate feeding or water practices, poisoned feed, or a hidden illness.

How Horses Can Develop Colic

There is a numerous amount of ways a horse can develop colic.

The Symptoms of Colic in a Horse

Unfortunately, the symptoms of colic don’t start until a horse is in a significant amount of pain. Since their stomachs are so large, it can take a while for them actually to show symptoms of colic. And not every horse experiences the same symptoms. Many experience pain and lethargy, while horses that are very outgoing and friendly to others will recoil and want to be on their own and away from others.

How To Measure a Horse’s Weight

But there is one major sign that a horse has colic no matter what age they are. There will be no digestive sounds coming from their stomach.

As colic affects their stomach, they will want to eat less and drink less water as well.

If a foal, or baby horse, has developed colic, they will often lie on their backs with their legs tucked behind them to ease their stomach pain.

How to Determine If Your Horse Has Colic

There is no sure sign that a horse has colic without a thorough examination from a veterinarian. When you invite the on-call farm veterinarian to come by and examine your horse, they will do several procedures. They will perform a rectal exam, an abdominal ultrasound, and a nasogastric tube will be placed into their nose and guided into the horse’s stomach to get a visual on the state of their abdomen. It is only with a veterinarian’s assessment that a horse owner can really know if their horse has developed colic.

How to Treat Colic in Horses

Since there are so many reasons why colic can appear in his horse, the veterinarian must first determine the initial cause. If a parasite is causing colic, then the parasite must be killed through medication or a deworming program.

If the horse’s abdominal area and stomach have been severely impacted to the point where they can no longer ingest food or allow food to escape to their lower regions, the veterinarian must perform surgery as soon as possible. During the operation, the veterinarian will remove the mass of food that is causing the block.

In most colic cases, medication can be used to remove the blockage, prevent the formation of gas, and reduce the amount of inflammation or pain the horse is experiencing.

What Happens If Colic Goes Untreated?

If colic goes on undetected or untreated for an extended period of time, it could be fatal to the horse. Since colic causes a blockage and extreme intestinal disruption, if it goes untreated, a horse’s stomach, lower intestine, or upper intestine could rupture. They could bleed out from their inner wound and die.

Do Horses Bite & How to Prevent It

If their colic isn’t fatal, then it would cause distention in their stomach, their abdomen, or their bowels. Distensions in any of these areas mean that there is a build-up of gas, undigested hay, and grains, or other substances which is causing extreme bloating to the point of pain. Distension can also cause a horse’s breathing capacity to lower, which means they will have a harder time exercising and moving around.

How to Prevent Colic in Horses?

There are several ways you can implement to prevent colic in your horse. One is to never feed too many grains to your horse. Greens and hay are different and have different structures. A horse should mainly live off grasses and hay.

Another way is to prevent colic is to grass and hay from growing in sandy areas. A horse can end up eating sand when they pull the grass up from sandy soil.

A third way to prevent colic is to keep your horse on a feeding schedule throughout the week. Don’t change their hours or mealtimes depending on your busy schedule. You must work around the horse’s mealtimes. If you do need to make a change to your horse’s diet and feeding times, you must do so gradually, as to avoid upsetting their stomach.

It is always a great idea to inspect your horse’s teeth and make sure no problems are preventing them from chewing their food correctly.

« Reasons Why Your Horse Bucks & How to Stop It

How To Clean Horse Hooves Properly »