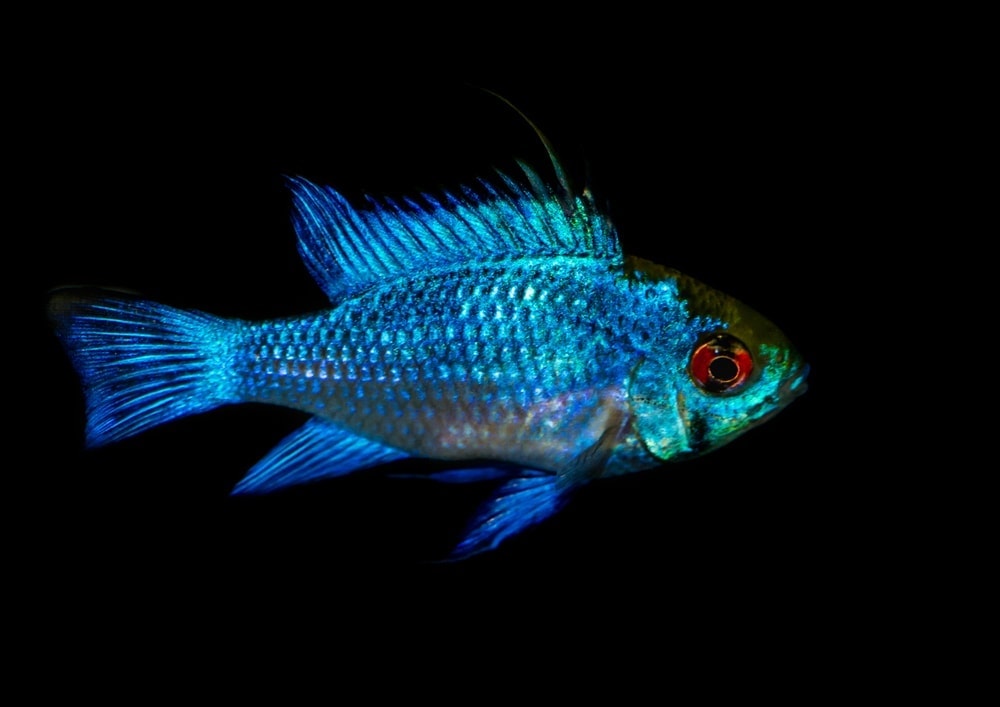 The Blue Ram Cichlid is among the most colorful of all the Cichlids.

This is just one reason why these fish are such popular pets. They are easy to care for, but there are still a number of things you’ll need to know before bringing one home.

Blue Ram Cichlids have a breathtaking color combination of yellow, white and blue. The scales on this fish almost seem to glow due to the vibrancy of their color.

They also have some black around their eyes and down the sides of their body. There is some red and blue on the pelvic fins, giving this fish quite an amazing aesthetic.

These fish live anywhere from two to four years on average. The maximum size of the Blue Ram is around three inches, so it is quite small. The average Blue Ram grows to about two inches.

Females are a bit smaller than their male counterparts, boasting a bright orange and pink belly along with an oval-shaped tail with a point.

The German Blue Ram is known for being incredibly tranquil and calm, which is pretty uncommon for Cichlids as a species. As social as these fish can be, they do quite enjoy isolating themselves in any crevices they can find. They tend to take notice of the world outside of their tank, which is something else that makes them such a sought after pet.

These Cichlids can naturally be found in streams as well as shallow pools. They tend to seek out areas that have lots of vegetation and sandy floors. You can only find them in tropical regions in the wild.

SEE NEXT:  7 Different Types of Goldfish

You will need to get a minimum 10-gallon tank if you are going to keep a Blue Ram Cichlid. If you plan to add other fish at some point, a 30-gallon tank is prudent. Make sure that you have properly cycled the tank and set everything up before putting this fish in it.

Keep in mind that moderate lighting is best for these fish, and they need a good amount of floating vegetation. When you are distributing the plants in the tank, you’ll need to leave plenty of room for them to swim around.

Put in some places for them to hide as well. There is simply no way to keep these fish happy if they don’t have at least one or two crevices to swim into.

The water in your Blue Ram’s tank should be kept at a temperature of 78 to 85 degrees Fahrenheit, as they are tropical fish. It should also have a pH range of 6 to 7.5 and a water hardness rating of 6 to 14.

It is also important to have a moderate current flowing inside this fish’s aquarium at all times. The closer the conditions of the water are to their natural habitat, the more likely it is they will thrive instead of just survive.

You can put a wide range of fish in with your Blue Ram Cichlid. It tends to get along with Discus, Neon Tetras, and Silver Dollars. Dwarf Cichlids are okay, but you shouldn’t keep them with any other sub-species of their own kind.

Clown Loaches and Cardinal Tetra are other options you should keep in mind.

It is also a good idea to avoid putting any big or aggressive fish in with your Blue Ram. This includes the Green Terror and Red Devil. Both of these fish are known for being very aggressive, as if the names weren’t enough to warn you of this.

The Blue Ram is an omnivore, which means that pretty much anything is on the table when it comes to their diet. It is common for these fish to not have much of an appetite for the first few days. This is due to the fact that they are still adjusting to their new environment and still a bit overwhelmed.

Frozen fish foods and insect larvae both make for highly nutritious and tasty meals for this fish. They also tend to enjoy Bloodworms and earthworms. After they have gotten used to the tank, you can give them two to five sprinkles of food each day.

While you can certainly give these fish pellets, they should not make up a majority of their diet. The fact of the matter is that pellets won’t satisfy all of the nutritional requirements of your Blue Ram.

These fish can develop any of the same diseases that other tropical fish do. You’ll want to watch out for signs of bacterial diseases, parasitic infections, skin flukes, flatworms, and Costia disease. They can also develop the fish version of tuberculosis, which can be quite serious.

You will be able to drastically reduce the chances of your fish getting sick by keeping their water clean. Maintaining a proper diet with your fish can also go a long way towards keeping it healthy over the long term.

Related Posts:
Leave a Comment Cancel reply
Related Posts
About Petsoid
Petsoid is a blog for all pet and animal lovers. We are a free resource for well-researched and unbiased pet information and product reviews. We are owned and operated by SellenMedia.