Do Dogs Have Belly Buttons? 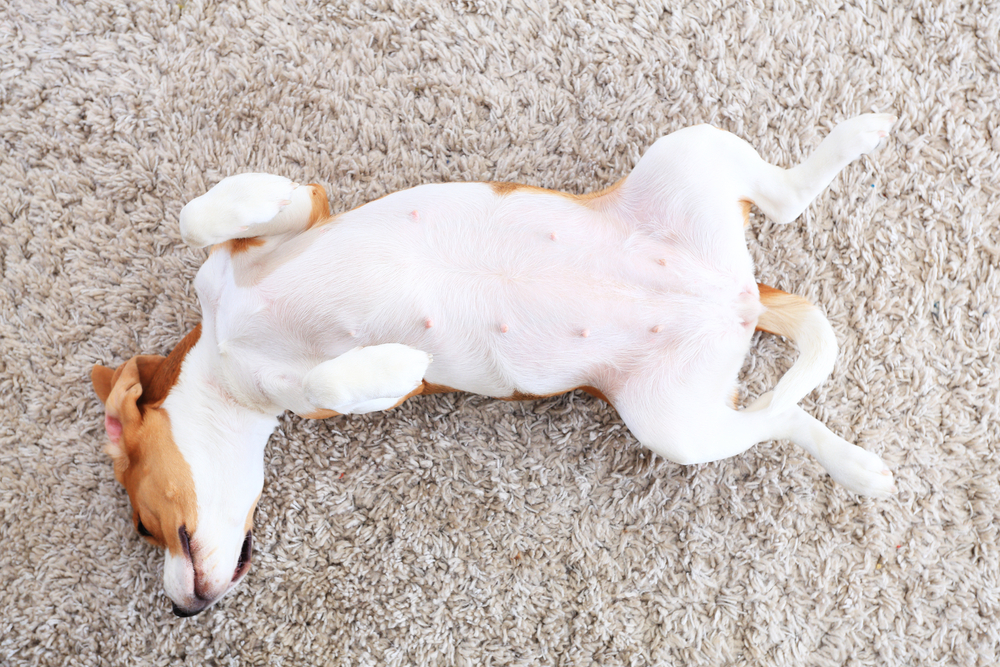 While you might not think of your dog as having a belly button, there are certain things about their anatomy that might be surprising.

This is a somewhat complicated question that entails a lot of different things that you’ll want to be aware of.

Before you start trying to find your dog’s belly button, it will help if you know what it looks like. It is going to look like a little circular swirl or wrinkly spot. You shouldn’t go in expecting to see something that looks just like a human belly button, though it is perhaps a bit similar.

Keep in mind that your dog’s belly button will most likely be covered with fur, so it can be tough to spot at first glance. It looks more or less the same regardless of the breed or size of the dog.

Where is a Dog’s Belly Button Located?

A dog’s belly button is a bit tricky to find unless you know exactly where to look. This is mostly because the area tends to have a lot of fur covering it. You might notice a little bit of fur in this area that is darker than the rest of their body.

Your dog’s belly button will be located at the bottom of their ribs between the nipples. Keep in mind that their belly button isn’t going to look anything like the one you or any other humans have. Canine belly buttons are much smaller than a human’s.

The one thing that dogs have in common with people when it comes to belly buttons is that they can have “innies” or “outies”. An outie belly button is caused by an umbilical hernia. This results from the muscles in this area not healing properly.

If you notice that your dog has an umbilical hernia after being born, you should get them to the vet right away. While this particular issue may not be life-threatening, it can cause certain health issues.

There are certain breeds that are more likely than others to have a herniated belly button. This includes Beagles, Pekingese, and Airedale Terriers. If you have one of these dogs, it is important that you check for this on their body.

A dog that has a herniated umbilical cord might exhibit the following symptoms:

If there is swelling in the area where their belly button is, it is likely they have a hernia that needs to be addressed right away. Dogs that have an “outie” belly button that protrudes from their body should be taken to a vet to be looked at. When left untreated, this seemingly small issue can be life-threatening.

Belly buttons result from scarring due to the umbilical cord, which provides dogs with the nutrients and oxygen it needs to survive while they are still inside their mother. One end of this cord is attached to the mother’s placenta, while the other is connected to the dog’s belly.

The spot where the umbilical cord used to typically heal up within a 4-6 weeks after the dog is born. If it doesn’t seem like it is healing properly or fast enough, you’ll probably want to take your dog to the vet. There is a chance that they could have a hernia, which requires immediate attention and treatment.

While a vast majority of dogs heal normally with no belly button issues, it is still important that you keep a close eye on this area the first month or so of your dog’s life.

My Dog Ate Cat Food - What Should I Do?

It’s Not Just Dogs and Humans

The fact is that every single mammal on earth has a belly button, even if it isn’t immediately noticeable. A lot of animals’ belly buttons are covered by fur, so you really have to know where to look. It is simply what is left behind once the umbilical cord is cut and the area heals.

Do I Need to Clean my Dog’s Belly Button?

Provided your dog has a normal “innie” belly button, you won’t have to worry about doing anything with it. Even herniated or “outie” belly buttons don’t need to be cleaned, but rather treated by a vet.

Your dog’s belly button is covered by fur, so you only have to make sure that you take good care of their coat. This means regularly brushing (especially if they have a long coat), and the occasional bath. Their belly button cannot accumulate dirt or anything else, as it is covered by the fur. This makes your job a little bit easier as a dog owner.

« Why Do Dogs Bury Bones?

Can Dogs Eat Raw Potatoes & Is It Safe? »