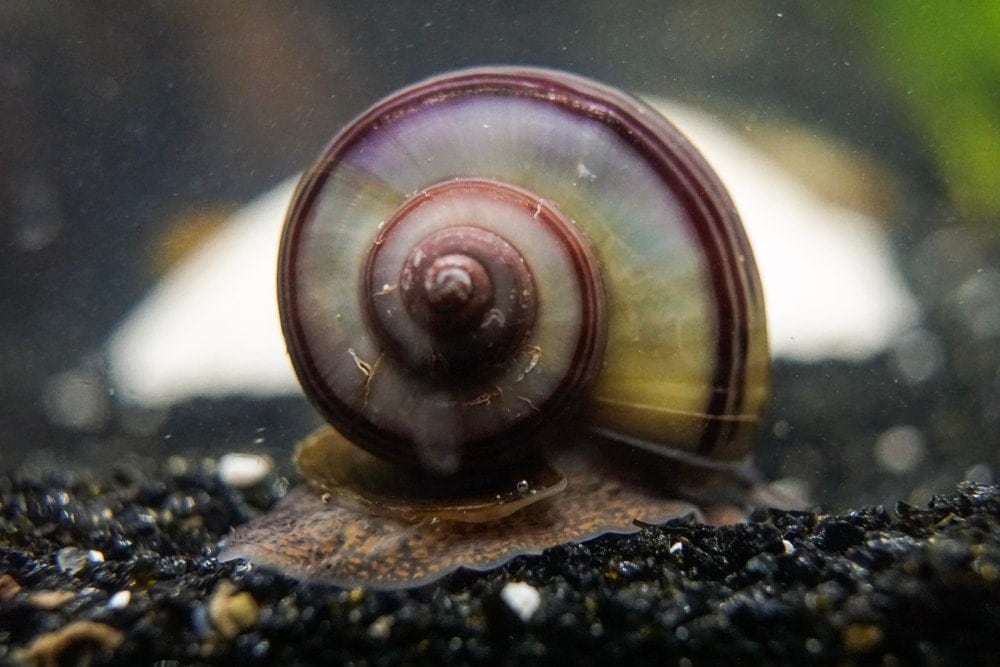 The Mystery snails can as well be nicknamed neat freaks because of their obsession with a clean environment.

Scientifically known as Pomacea brigesii, the mystery snails love and live in freshwater, they do have an operculum and gills. The latter is used for breathing; their skin is also water permeable and can thus be used for breathing, the operculum is more like closing a or a door to the snail’s shell.

Snails are very resourceful in a fish tank especially the mystery snail, for one they will feed on the leftover fish foods or debris, and will also clear all the algae that might have started to develop in the fish tank. They are also good at burrowing, so if introduced in an aquarium, they would help aerate the substrate ridding the tank of deadly anaerobic gases.

They are docile, slow-moving peaceful vacuum cleaners that will do the donkey work in an aquarium while you take a rest. They also love to have fun and once in a while you will see them taking a free fall from the top of the aquarium, I don’t know how safe this is for them since the floor of the aquarium is filled with gravel but then again work without play makes jack a dull boy.

So they are also smart and can spot an aggressive aquatic animal approaching and hide in their shells, another interesting characteristic is how they let go off a part of their body and slide down the glass window.  The snails are mostly found in japan and china, and in some countries, they are used as food, they normally inhabit the ponds, rivers, and swamps.

They feed in detritus and decomposing plant material while in the wild and are always in danger of fish and birds that have the ability to break their shells. So when you keep them in your aquarium, to avoid stress, do not let them share the tank with aggressive fish as it will hamper their freedom of movement and their cleaning processes.

Enough room should be provided in the tank to allow movement and don’t forget to put a cover on the aquarium because they love their freedom, and will not hesitate to climb off the tank when the opportunity presents itself.

The mystery snails do love their peace even in the environment that they live, highly oxygenated water with a bit of movement is appreciated but they also don’t love rapid changes in water. You risk stressing the little creatures when you abruptly change the water and expose them to tough conditions. Remember their shells are prone to dissolving so it will be important if their water had a high PH of about 8.4.

Changes in temperature can be harmful to the snails, the reason why you should maintain it at 68 degrees Fahrenheit to 84 degrees Fahrenheit. Initially, we talked about the snails being in danger of aggressive fish and birds that might try to break their shells.

When kept with other docile fish in the aquarium they don’t run the risk of being hurt but that doesn’t mean that the calcium supplement shouldn’t be provided to help build strong shells. the most common one used is the cuttlebone.

Feeding the snails is one of the easiest things that you are going to do because you only need to make sure that you have vegetation in the tank. Detritus and decomposing plant materials notwithstanding, you will need to feed the mystery snails some proper food that is also highly nutritious. One such food can be prepared with peas or squash.

You will heat the above food for one minute, and mix it with unflavored gelatin and if you have fish food feel free to add it in the mixture. Put the food in a refrigerator so that it can set; the resulting food is known as Snello and you can, therefore, cut it into cubes as they will be ready to be fed to the snails.

Wash and blanch green vegetables, like lettuce and Zucchini and put them in the tank for your snail to feed on. Supplements include the pellets, flakes or tablets that are a necessary addition of nutrients, leftover food particles should not be left in the fish tank because they will most likely compromise the quality of the water and lead to the development of health problems.

All animals do feed their young ones, especially in the wild, the mother goes out and brings food. How the snail does this while in the wild is still a mystery but when kept in a fish tank, they do not mate if you don’t provide enough food. This is so that they don’t reproduce kids that will have nothing to feed on, well, that’s the mystery snail for you.

With the proper tank conditions, the mystery snails will mate, however, you will need to provide a headspace above the water level, for the female snail to lay her eggs. If your tank is big enough you can leave the cocoon inside for more snails to be born but if you have limited space or have reached the required number, just get rid of the cocoon.

The best roommates for your mystery snails are the guppies, tetras, and killifish that love to mind their own business. Members of the Shrimp family are also very docile and peaceful; the Amano, Cherry or ghost shrimp, would, therefore, be a nice addition to your aquarium.

Most health problems of the mystery snail concern its shell, which could be damaged if you don’t provide calcium supplements. Another pain in the neck is worms, the Rat Lungworm, whose origin is the rodents. The larvae of the lungworm are always in the habit of using the snail as its temporary host until it grows into adulthood.

There are also the Grub worms that are normally present where wild snails have been adopted. You might have noticed some small white cysts at the snail’s foot. The problem with these little creatures begins when they are ruptured because it then releases flukes into water that could be a danger to your fish.

When released into the water the flukes will encyst the flesh of the fish and you will then have to remove them physically. Failure to which the Grub worms will stay in the host fish until it dies, the problem is however not perennials as they grub worms lack the ability to reproduce in the tank.