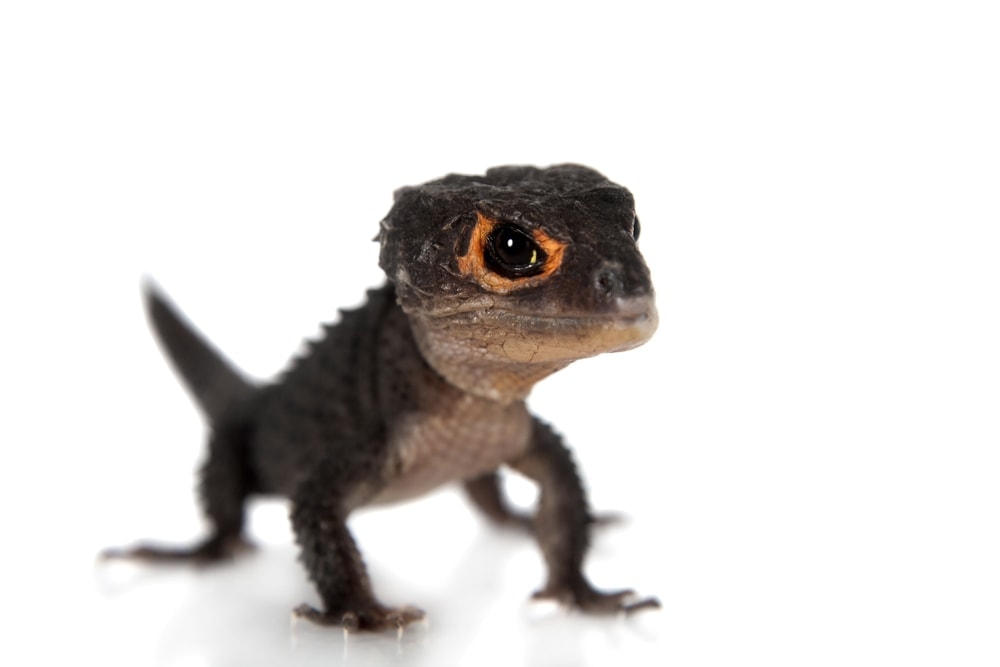 Looking For An Awesome Pet? Your Search Ends With Red-Eyed Crocodile Skink!

Yes, you may thank us later!

There are a lot of people who go clueless to the pet stores with the vague idea of getting themselves a pet reptile.

So, while you were explaining to the guy at the counter what kind of reptile you were looking for, your eyes met an adorable lizard in a terrarium right behind him!

Was it a lizard? Or was it a snake?

You know you saw the lizard’s head, but it had no neck or legs and feet! Were you dreaming? Did your mind conjure up that image? It turns out that you have discovered one of the most gorgeous of reptile pets that you are eventually going to take home! No prizes for guessing that it didn’t take you even one whole minute to convince you that the red-eyed crocodile skink is the one for you!

A little about skinks and why they make great pets:

A lot of people do not know about skinks. They belong to the lizard family that has no necks and shortest short legs or sometimes no legs and feet itself. They move about like the snake on their bellies. There are at present 1500 species of skinks, and the red-eyed crocodile skink is by far the most popular one for a pet.

Skinks are found in Australia, New Zealand, and usually captured from wild to be sold by unscrupulous pet dealers. However, we can say with certainty that the skinks that are available in the US are all bred in captivity.

Is there a reason why you must choose a skink that is captive-bred?

The most common of all skinks is the Red Eyed Crocodile Skink that was discovered only in 1915 by the celebrated Dr. Rooji at the Zoological Museum in Amsterdam. The species whose scientific name is Tribolonotus gracilis is a shy lizard that is active mostly very early in the mornings or late in the dusk.

There are eight species in the genus Tribolonotus. They are:

The gracilis and novae guineae are the most popular ones in the pet trade. Importing the lizard too much of the western world began prolifically only in 1991.

There wholesale clearing of its wild habitat that gave way to a coconut plantation is the reason why most of the species are still concentrated either in the forest debris near some of the other waterways or leaving on coconut husks in the new plantations.

Lizard aficionados will love this creature with a healthy body and stout legs. It gets its peculiar name from the four rows of dorsal scales that resemble the scales of the crocs. The iris of the skink is particularly attractive with a dark brown inner and surrounded by bright red and orange!

The adult red-eyed crocodile skink is dark brown on the dorsal side and a cream yellowish underbelly. The coloration on the body and the eyes only comes with age maturity of about 6 months. Till they are younger than that, breeders generally get confused with their breed.

Adult skinks are all of 8 to 10 centimeters in length. We measure from the mouth to the vent. The proportion of the body with the tail is in the ratio of 1:1.

What you should be able to provide when you bring these cuties home:

A 3 to 4-foot aquarium is more than enough for a pair of Red-eyed crocodile skink. They are not territorial, and so you will have no issues with their aggression. In this, a minimum of 5 to 6 inches substrate is sine quo non because it will closely resemble its wild habitat.

We recommend that you use hydroponic clay along with locally available coconut husk to create the substrate. The benefits of this are that it will encourage the growth of microfauna that can become food as well as forage for the lizards to move about and hide. It can closely resemble its natural habitat. The water in the clay layer will wick up to ensure a constant supply of moisture.

The aquarium must have a glass lid that can be removed to promote evaporation. Otherwise, there can be a growth of moss inside. A 13 wattage CFL light that is on for at least 12 to 14 hours in the day will provide it enough heat. A UVB light is a must for it to be able to synthesize its calcium and Vitamin D3 intake.

The red-eyed crocodile skink is all ways a tropical lizard, and that is why they must be kept in a humidity level that fluctuates lightly between 70 and 90 percent. The ambient air temperature that is ideal for them is pegged at around 80F. If you stay in colder climes, you could opt to use higher watts of light, an under-tank heating pad, or thermostat controls in the room to maintain an ideal warm temperature.

Skinks can be fed a variety of small insects like live crackers, worms, roaches, and their favorite earthworms. Guts load the insects or dust them with multivitamin powder before feeding the skinks.

Place a lightly buried shallow dish filled with fresh water daily, slightly buried in the substrate in one corner of the enclosure. The water must be enough to let it submerge itself completely.

Skinks do not bite usually, but they hate being handled too much. They can perform autotomy to drop their tails if handled carelessly or if threatened or stressed too much. Don’t worry because the tail does regenerate in a few weeks. They can play dead and even vocalize dissent to be handled too much. They have a high display value, and if left to themselves, they are entertaining companions. You can spend hours looking at its antics and not become bored with it.

« How Big Do Red Heeler Dogs Get?