When Will my Puppy’s Eye Color be Permanent? 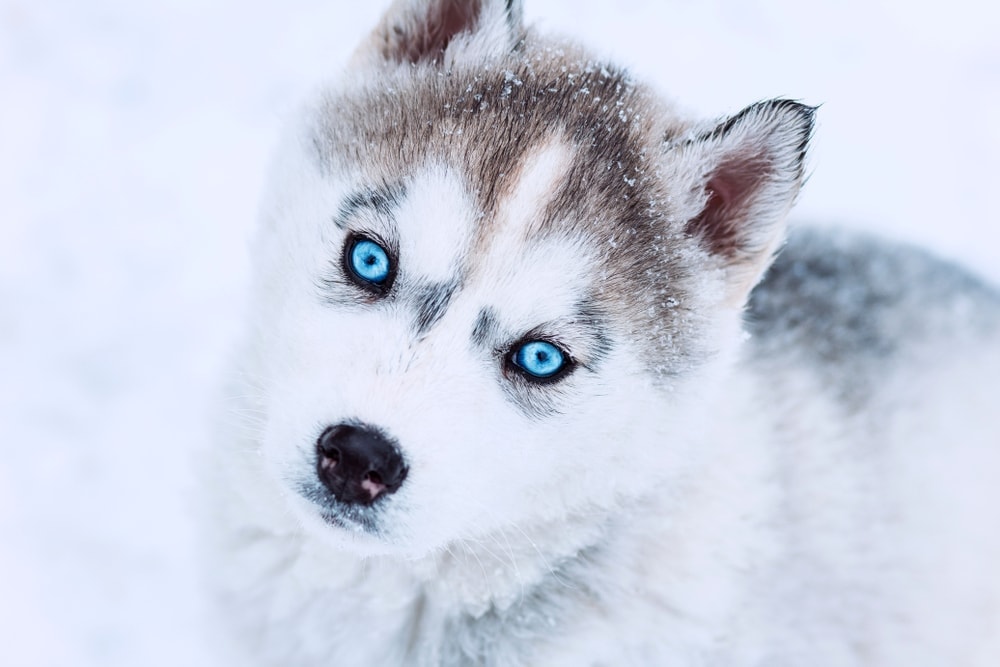 A dog’s eyes are a big part of what makes these animals so darn adorable.

They are rarely born with the same eye color as they have when they are fully matured though.

If you have a new puppy, you will definitely find this information interesting.

Puppies do not even open their eyes until they are about two weeks old. This is the period of time in which they begin nursing from their mother. All puppies are born with blue eyes, which may appear a little blurry at first.

There are some puppies that have eyes that are a dull blue, while others are more brilliant. The reason that they all have blue eyes is because melanin has not yet started being produced. This chemical travels to their irises, giving their eyes a permanent color.

As your puppy gets older and its vision becomes sharper, their eye color begins to change. Once they have reached full maturity, their vision is as good as it will ever be. You should be able to notice a subtle change in their eye color from week to week.

If your dog doesn’t open its eyes by two weeks of age, you should take it to the veterinarian. There could be something wrong with your dog that requires medical intervention. Some dogs are born with eye problems, though it is fairly rare. Your vet will be able to tell you if they are just a late bloomer or if there is an actual problem.

When Will I See My Puppy’s Permanent Eye Color?

You should start to see the color that your dog’s eyes are going to be for the rest of its life around 3-4 weeks after it is born. Their eyes will slowly become darker in color, usually turning brown.

It actually takes some dogs as long as three months for their permanent eye color to develop. Some dogs end up with a lighter shade of brown in their eyes, while others have a darker brown coloration.

Why Do Dogs Chew Their Paws or Nails?

Some breeds of dogs tend to have blue eyes their whole life, including Siberian Huskies and Australian Shepherds. While this is usually not the case with most breeds, it is a possibility with pretty much any dog. Genetics play a primary role in determining what color a dog’s eyes are going to be as a fully matured adult.

It is possible for dogs to have other eye colors, including amber and hazel. For example, Chocolate Labs often end up with amber-colored eyes. This is something that is usually determined by the breed.

Dogs that have a liver colored coat are more likely to eventually develop amber eyes, but they are still blue as newborns. Merle-coated dogs often keep their blue eyes, though they usually get progressively brighter as the dog develops to full maturity. This is as good of a way of predicting your dog’s eventual eye color as anything.

There are some dogs that inherit blue eyes as a gene that has nothing to do with the color of their coat. It is important to keep in mind that this is by no means a definitive way to tell which color eyes your dog is eventually going to have. It can, however, be a good indication in lots of cases.

As we stated above, some dogs can be born with certain eye problems, including glaucoma. While this is a condition that usually develops over time, puppies can also have it. The dog’s corneas will appear cloudy or bloodshot.

If you notice these symptoms, it is important that you get to your veterinarian as soon as possible. Surgery is often needed in this case, and it is often successful, especially with younger dogs.

There is also a chance that your dog could have cataracts, which can be just as serious as glaucoma. This is another medical issue that usually requires surgery to correct. It almost always develops fairly slowly over time as the dog ages.

Unique Dog Names & How to Choose One

While it is somewhat rare, there are done that have two eyes with two completely different colors. This is called heterochromia, and it is perfectly harmless. It is caused by an imbalance in melanin, which results in the very conspicuous difference in eye color. One eye is usually very dark, while the other is much lighter.

There are certain breeds that are predisposed to heterochromia, including Siberian Huskies and Louisiana Catahoula Leopard Dogs.

This can be a sign of a serious eye problem that needs to be addresses right away. If you notice your dog developing different colored eyes, you should get them looked at just to be safe. This is one of the reasons why it is so important to get a checkup for your dog shortly after it is born.

Sometimes the difference in eye color with dogs that have heterochromia is subtle. They might have one eye that is light brown while the other is slightly darker brown.

« What Does it Mean When a Puppy Humps?

Why is my Chihuahua Aggressive? »

My puppy is 4 months old. She's a Chesapeake Bay Retriever. Her mom is very dark brown but, dad was the color of deadgrass. Mom's eyes are really brown and dad's are the amber color. My puppy has the dark brown coat but amber eyes. Is this normal or should I be concerned? I wonder too if her eyes will still change.

Hi Lisa. At the age of 4 months eyes can change color but just a bit so most probably your puppy will be with amber eyes. But amber eyes are totally normal and you shouldn't be worried at all as long as you don't participate in a dog shows. I would say it's very beautiful.

I talk to my dog always as well. And I can bet she understands me!

One puppy parent is Merle and has heterochromia. At what age would this clearly show up in the pup if it is going to?

Usually, It's visible immediately after pup has opened his eyes. If no - wait a week or two.