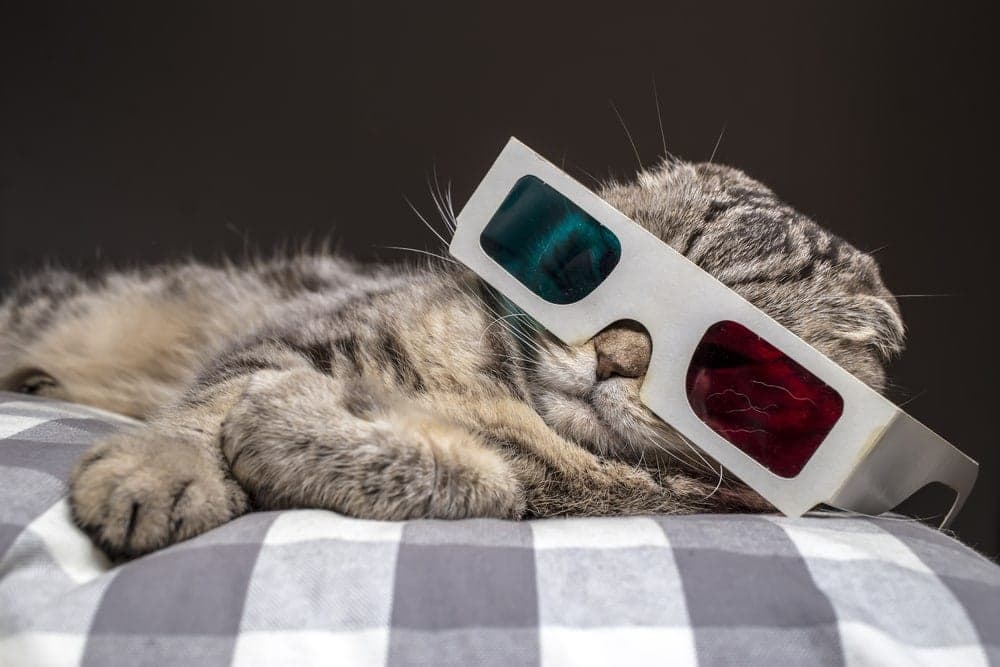 Catching your cat watching TV is amusing to say the least, and it is actually a fairly common behavior for these animals.

In fact, some of them do it even more than dogs.

This is just one of the many joys of having a feline companion at home.

While humans are capable of seeing colors better than cats, many of them still love watching TV a lot. It is also likely that your cat sees the TV as a flickering picture instead of smooth and seamless. This is due to the fact that a cat’s brain processes images a lot faster than humans.

One study found that cats seem to prefer TV programs with fish, birds, and various rodents in them. This should come as no surprise to those who know what a cat’s natural prey is. This stimulates the inner hunter in your pet.

Cats also tend to like anything that involves fast moving objects. They might interpret these things as prey trying to escape.

Whether it is a commercial or a nature documentary, cats can find a lot of different things on TV absolutely fascinating. It is not uncommon for these animals to spend long periods of time doing this.

Listening to the TV

It is very likely that your cat is just as captivated by the audio of the TV as the video. These animals have pretty good hearing, and certain sounds might pique their interest or attention more than others.

If your cat hears another cat or even a dog on TV, they might take notice and stare at it. A meowing cat can really grab their attention very quickly.

Cats are high energy animals that are capable of just about anything, especially when they are mentally worked up. If your cat is intently watching TV, you’ll need to make sure that it doesn’t get carried away and attack it. All it takes is seeing some of their natural prey on TV to get the wrong idea.

My Cat is Snoring: Is it normal?

If you notice your cat exhibiting any signs of its natural hunting instincts, you’ll definitely want to keep a close eye on them. You don’t want to leave your pet alone in a room watching TV by itself, as it could mean the end of your television.

Modern flat screen TVs can be knocked over quite easily. If you have a cat that likes to watch television, you might want to think about mounting it to the wall. There is, however, always the chance that they could scratch up the actual screen.

You simply never know when your cat’s primal instincts might kick in, so you always need to be vigilant when your cat is engrossed in whatever is on the tube. This can be very cute behavior until it takes a turn for the worse.

It is important that you provide your cat with plenty of toys to satiate its primal instincts. This will greatly reduce the chances of having your TV ruined by overly zealous kitty. If these instincts aren’t being satisfied in one way or another, they are likely to act out in destructive ways.

Some cats do actually watch TV more than dogs, but it depends on a number of things. There are certain breeds of both animals that are more likely than others to do this.

It also depends on the animal’s age. Young cats with good eyesight are more likely to watch TV than older cats that have poor eyesight and/or hearing.

Neither of these animals can distinguish between a person on the TV and someone in real life. They can, however, tell the difference between an actual person and a cartoon. The fact is that watching TV is easier for most cats because of their vision.

The position of your TV doesn’t really make a difference when it comes to how likely your cat is to watch whatever happens to be on. This is not the case with dogs though.

Why do Cats Watch TV?

A lot of cats watch TV simply because there is something on the screen that interests them. This is usually another animal, whether it is a cat or their natural prey. It could also be something that is very shiny or sparkly.

As we mentioned above, audio plays a big part in why these animals seem to love watching television. There are all sorts of noises that appeal to these animals.

Your cat might also watch TV due to boredom. These animals can become bored just like us, which can lead to all sorts of interesting (and amusing) behaviors. This can be a good way to break up the monotony of a cat’s life from time to time.

If your cat is watching TV a lot, there is a good chance that you do not pay enough attention to it. Try playing with your cat more often so they get the mental and physical stimulation they need. This will also minimize the chances of having your TV damaged by a frantic cat.

« Why Do Cats Grind Their Teeths?

Why Do Cats Cover Their Face When Sleeping? »