Why Do Dogs Chew Their Paws or Nails? 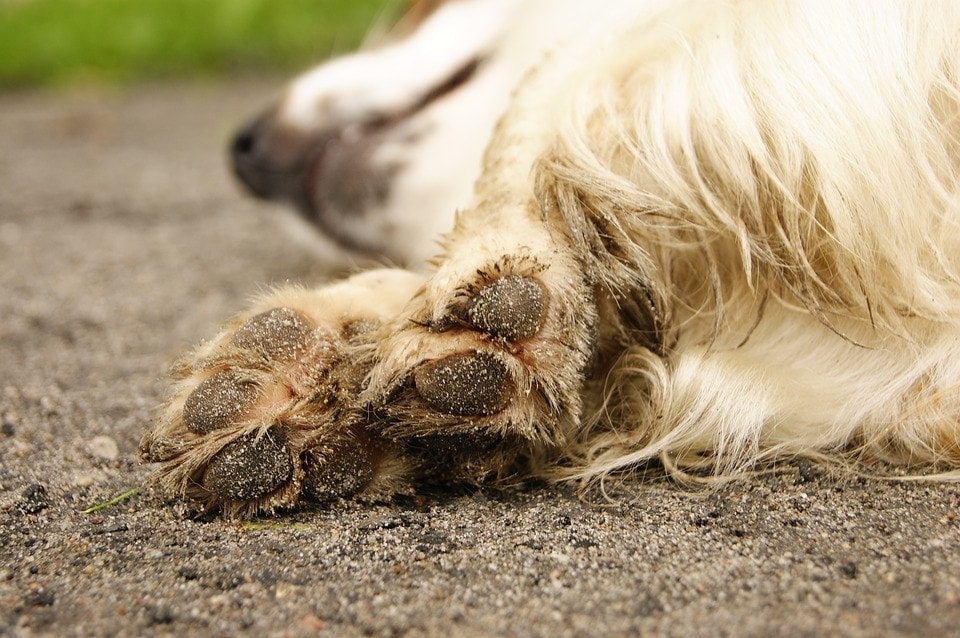 You can get your child to stop biting their nails, so can you do the same to your dog?

‘While it is easier said than done, the reason why dogs bite their nails can be very different from why human bite theirs. For the case of humans, it is usually out of a habit or because they are nervous and hence feeling anxious.

All of these can be rectified easily. For dogs, it is actually entirely different as it is not out of habit. Also, even if the dog is feeling anxious, they will not chew on their nails as they do not rely on it to ease out of the anxiety problems. In addition, the dogs might lick their paws too.

Why your dog chew his/her paws

So, why do some dogs chew on their nails and lick their paws? Let’s find out.

The top reason why dogs chew on their nails and lick their paws is because of an infection, and the infection is causing some itchiness in the affected area. It could be a bacterial infection or even a fungal infection. The causes of infection can be many, but most of it is due to injuries.

When the nail is injured, it will sometimes lead to an exposed wound. We all know that exposed wounds are always a natural nest for bacteria to form. As such, the wound, which is the nails, will become infected.

And what happens after the dog chews on the infected nail? It will further propagate the problem. It can sometimes lead to further problems and might warrant a visit to the vet.

Actually, it can be possible that the dog is very bored and is chewing on their nails to relieve themselves of the boredom. While this is not common, it can still happen to your dog.

The best way to circumvent this is by spending more time with your dog. You can also opt to purchase interactive dog toys for them to keep themselves entertained.

Some dogs chew on their nails and lick on their paws when they are suffering from an allergic reaction that causes the affected area to itch. The chewing and licking are a coping mechanism to help sooth or temporarily stop the itch.

One of the common allergies can be Atopy, which is also known as the inhalant allergy. It is caused by allergens that are in the air, and these airborne allergens can cause itchiness not only to dogs but to humans as well.

Once the dog develops this allergic reaction, they will inevitably lick on their paws and chew on their nails to relieve some of the itch. Apart from the airborne allergens, there can be allergens in the dog’s food that is causing them to itch and hence the licking and chewing of the paws and nails respectively.

Make sure that you give your dog the right food. Check out our article Best Dog Food.

If you notice that your dog is chewing on their nails and licking on their paws after you walk them, you should immediately check the paws and nails to see if there is any injury that the dog might have suffered.

When dogs have injuries, it is very common for them to lick and chew on the affected areas so as to soothe the pain. In other cases, it is entirely possible that some impurities might be lodged at the dog’s paws, and they are licking and chewing on the area as they try to remove the impurities.

5. Nails are long or broken

It is highly possible that if the nails are long or broken, the dog might chew on the nails so that they can better manage the length. Hence, you should always avoid trimming the nails only when they are too long.

We would suggest you to periodically trim the nails so that they wouldn’t need to manage it themselves.

As the chewing and licking can be a result of a chronic issue, it will be important for you to take steps so that you can rectify it.

As we have shown above, one of the main culprits of this behavior is because of long nails. Long nails can trap dirt as well as hurt your dog, resulting in injury. It can also force your dog to manage the length on their own by chewing on them. Hence, one of the best ways to mitigate this is by trimming the nails.

My Dog Ate Weed, How Long Will It Last?

If you hear the dog clicking on the floor while walking around, then it is a sign that you should either trim their nails or bring them to the groomer.

If the cause of the dog’s constant chewing is because they are bored, then you should do some activities that can engage their senses. You can either do some training with them, bring them outdoors, or even purchase interactive dog toys that can train their mind.

Should your dog suffer from an injury and starts licking on the paws, the immediate rectification step would be for you to check on the location of the injury. It can be present in the paw or even in between the toes.

Since the dog is already licking on the affected area, it will become an incubator for bacteria to infect the wound. Hence, cleaning up the wound will be important. To do this, you can either apply antibiotic treatments on it and bandage up the area.

However, if things get bad, you should bring your dog for further medical attention at the vet.

4. Know your dog and their food

Allergic reactions are also one of the causes of the habit of chewing and licking on the nails and paws. One of the suggested ways to remediate this is by knowing your dog as well as controlling on their diet.

Knowing your dog does require you to put your dog through allergy tests to find out what food are they allergic to.

Once you are armed with this information, you can easily choose the type of food that you can give to them as you would know which are the ingredients that you should avoid.

« What to Do if You Cut Your Dog’s Nails Too Short?

Reasons Why Your Dog Pees in Bed »