Why Do Dogs Eat Underwear? 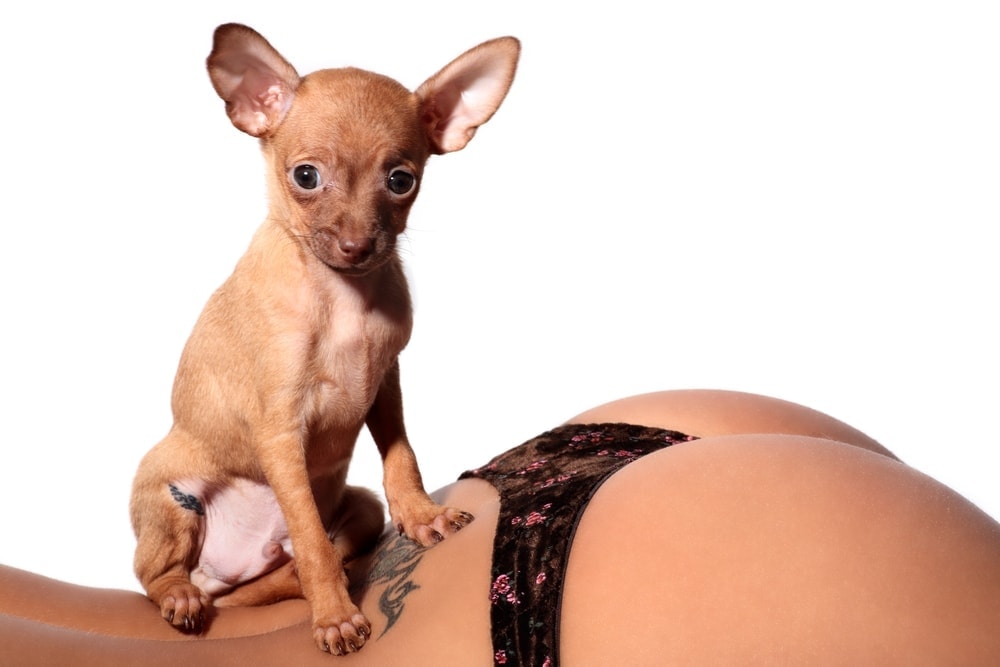 If your dog gets into your underwear and eats some of it, there are a number of health concerns to consider.

There is no telling what could happen, so you want to be prepared. This is a crucial part of being a responsible dog owner.

The Dangers of Your Dog Eating Underwear

The main reason that your dog eating underwear is not a good thing is because of the materials it is made of. Plastic, elastic and most fabrics used in making undergarments are not digestible for dogs. This poses a number of potential issues, including an intestinal obstruction, which can be fatal.

There is also a chance that your dog could choke when eating your underwear, especially if they eat a lot of the material at once. The fact is that there are many possible risks to your pet’s health when it eats any of your clothing.

There are a number of possible reasons for your dog eating your underwear that you will need to consider.

A puppy that is still teething simply cannot resist a pair of underwear when they come across it. Teething dogs will chew on just about anything, and some of what they get their teeth on ends up getting ingested.

If your dog is between four and seven months old, there is a good chance that they ate your underwear for this reason. While teething has been observed in older dogs, it is much more common with puppies and juveniles.

Boredom can certainly be a motivating factor when it comes to bad behavior in dogs. If you aren’t spending an adequate amount of time with your pooch each day, there is a chance that they will begin acting out in various ways. This is simply your dog’s way of trying to get your attention because it feels neglected.

3. They Have a Medical Condition

There are some medical conditions that can cause dogs to chew on and eat just about anything. Pica is such a condition, and it can be very dangerous for dogs. There are a number of causes, including an improper diet. It could be that your dog isn’t getting the nutrients it needs on a daily basis. Your veterinarian will be able to tell you more.

My Dog’s Eye Rolls Back in its Head - Common Reasons

4. Their Natural Instincts Are Coming Out

A lot of dog breeds have been used for hunting going back hundreds of years. Besides that, these animals have natural hunting instincts that sometimes come out despite being domesticated.

Some dogs like to go “hunting” at home to satisfy these primal urges, which is understandable. It is not truly aggressive behavior, but rather a sort of pretend play. Unless it happens on a regular basis, this is nothing that you should be concerned with.

5. They Detected Your Scent

Dogs have extremely powerful noses (much more so than humans), so they sometimes pick up on scents that strike their fancy. Your dog might have eaten your underwear because it smelled your scent on it.

It doesn’t even matter if the underwear was recently washed—that is not strong a dog’s sense of smell is. There are certain pheromones that we give off that cling to our clothes. This is just a sign that your dog feels very strongly about you.

How to Keep Your Dog from Eating Your Underwear

If your dog keeps getting into your underwear, it is important that you take steps to prevent this. As we mentioned above, this behavior poses a direct threat to your pet’s health.

1. Use a Repellent Spray

There are numerous repellent spray products on the market that are designed for keeping dogs away from almost anything, including underwear. You can spray one of these products around where you keep your underwear so your dog doesn’t get tempted. It is important that you take the time to find the right spray, as there are many of these products available.

2. Don’t Leave Your Underwear Sitting Out

The best and perhaps the simplest way to ensure that your dog doesn’t eat your underwear is to keep it tucked away in a dresser drawer. Unless your dog can open drawers, you shouldn’t have anything to worry about.

Leaving your undergarments sitting on a surface that is low to the ground or in a hamper is such asking for trouble. You don’t want to do anything that will tempt your pooch.

3. Take Your Dog to the Vet

It may be necessary to take your dog to the veterinarian if it seems as though this behavior is indicative of a medical problem. If your dog chews on and eats a variety of things that it shouldn’t be interested in, there is probably an issue.

4. Spend More Time With Them

If your dog is chewing up your underwear because it is boring, the best solution is to spend more time with them. This will likely put an end to unwanted eating. You might also want to get your dog a little more exercise on a daily basis. It could be causing trouble at home because it has so much pent up energy.

« How To Stop Your Dog From Barking at Night?

How to Stop Dog from Shedding »