How Can Cats Jump so High? 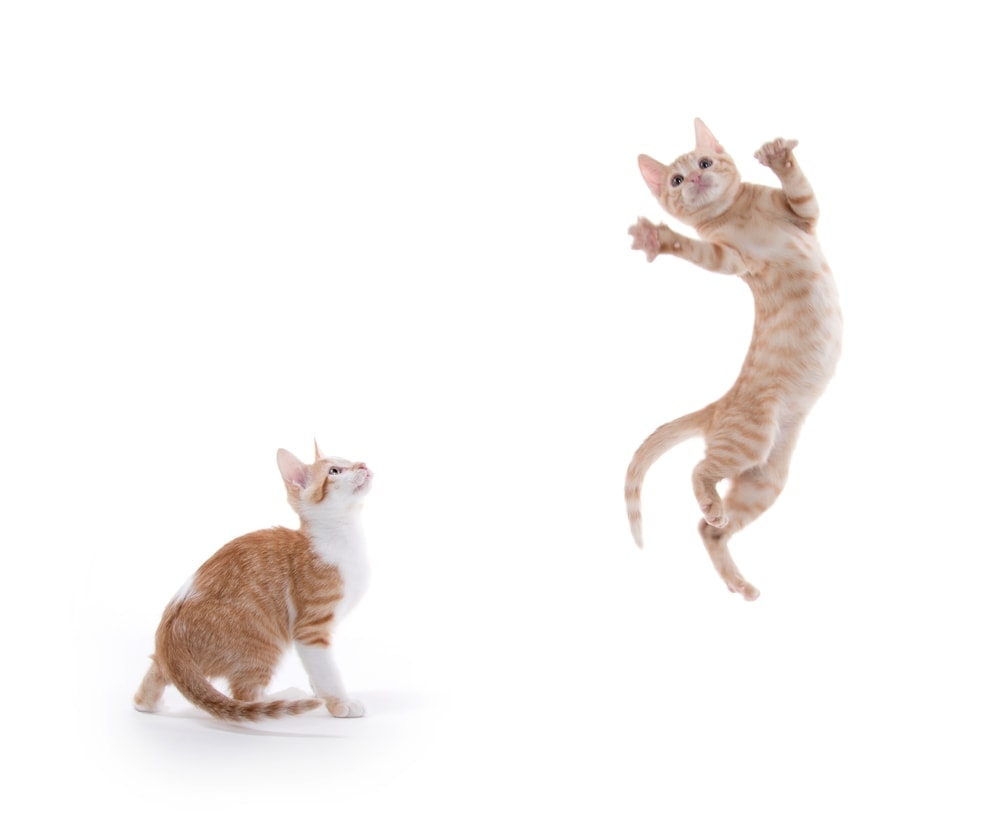 Cats are known for their ability to jump amazing heights in a single bound.

There are some fascinating reasons as to why these animals have an uncanny ability to jump so high.

This ability serves these animals well as natural born predators.

What Determines How High a Cat can Jump?

There are a number of factors that ultimately determine how high a cat can jump, including:

Landing on Their Feet

The old saying that a cat always lands on its feet is (usually) true. In fact, the greater the distance a cat falls from, the more likely it will be to survive. These animals turn their body so ensure that they land on their feet, even when falling from a great height.

This is an instinctual response that greatly increases their chances of avoiding injury. It is known as the “righting reflex” and is likely why people say cats have nine lives. They are just so unbelievably good at avoiding serious injury where humans would fail miserably.

The explanation for a cat’s ability to jump great heights goes back many years to their ancestors. They likely evolved from animals that had to leap high up from trees to kill their prey, which naturally demanded excellent jump skills. Over time, these animals simply became very adept at jumping up to incredible heights within a matter of seconds.

Can You Shave Your Cat & Should You?

Before a cat decides to jump, it usually makes sure that the surface they are on is stable enough to properly propel them forward. This consists of pressing down on the surface with their hind legs. It is something that they do very subtly, so you are unlikely to notice unless you are really paying attention.

These animals can jump onto very narrow platforms without any issues whatsoever. They carefully consider where they are currently standing and where they want to go before making the leap. Sometimes a cat misjudges the distance or the stability of their current surface, missing the jump entirely. This can make for some extremely amusing moments to say the least.

Perhaps the most basic reason for a cat’s jumping capabilities is its flexible spine. These animals truly are born jumpers, and it is clear from their swift movements. They have a total of 53 vertebrae, which is a total of 20 more than humans.

These animals do not require as much bone density as humans, which his partially why the muscles in their legs work so well for jumping. A cat’s hind legs are also longer than their front legs, which is another reason that they are so fine-tuned for this particular activity.

The quick twitch muscle fibers that cats have allow them to respond quickly to potential predators, jumping several feet within a short second. This has allowed them to avoid becoming another animal’s dinner over the years going back a very long time.

Outdoor cats tend to be more skilled jumpers because they get to satisfy their primal hunting instincts. Cats that grow up in the wild quickly learn how to jump high from their mother. This is a behavior that serves them well when it comes to catching their prey.

Indoor cats are also great jumpers, but their entire skill set is not fully realized. These animals do not fully utilize all of the things that make them such effective hunters. They do not need to jump in the same way that outdoor cats do. It is not a matter of life and death, but rather convenience.

How High can a Cat Jump?

A cat can easily jump several feet in a single bound. The world jumping record for humans is around 8 feet, which the average can easily achieve. As we mentioned above, young cats that are still in very good health can usually jump the highest. There is no telling what the maximum jumping ability of this animal is, but it far surpasses ours to be sure.

« Why Do Cats Chatter Their Teeths?

Why Do Cats Grind Their Teeths? »